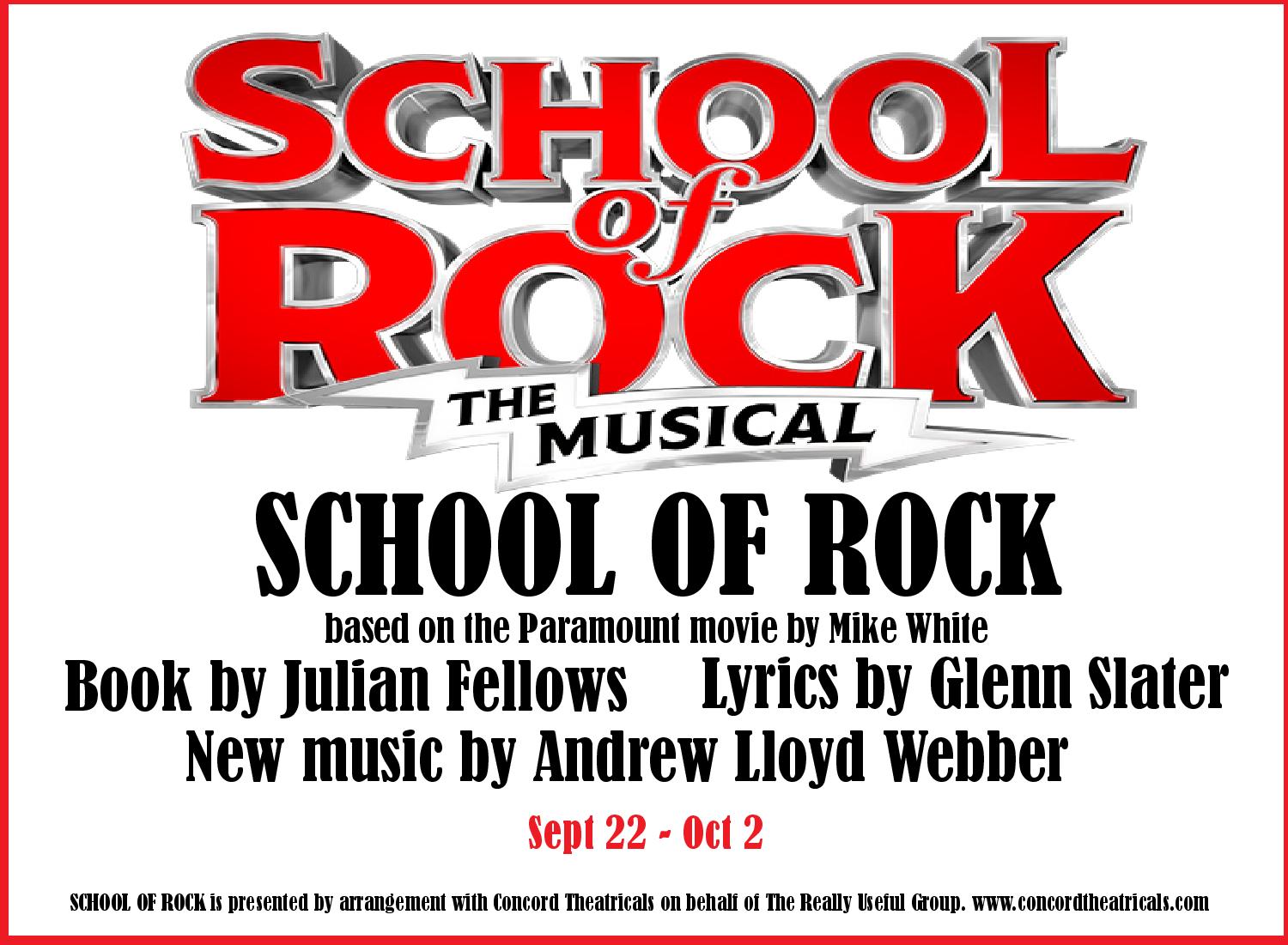 In-depth info can be found using this link:  https://stageagent.com/shows/musical/16225/school-of-rock

Rock got no reason, rock got no rhyme…You better get me to school on time! School of Rock is a two-hour, two-act musical, based on the hit movie. The tuner follows Dewey Finn, a failed, wannabe rock star who decides to earn an extra bit of cash by posing as a substitute teacher at a prestigious prep school. There he turns a class of straight–A pupils into a guitar-shredding, bass-slapping, mind-blowing rock band. But can he get them to the Battle of the Bands without their parents and the school’s headmistress finding out?

The Adults
● Dewey Finn (Plays Guitar and Sings Rock Tenor): The protagonist, Dewey is a struggling
rockstar who is kicked out of his band, No Vacancy , at the beginning of the show. In need of
money, he impersonates Ned Schneebly and gets a substitute teacher job at the Horace
Green School, where he founds the band School of Rock with the students, who are musical
prodigies. Dewey is usually wild, desperate, naive, dull-witted, and somewhat more childish
than his students.
● Rosalie Mullins (Mezzo Soprano): Rosalie is the principal of Horace Green, and is very
uptight and traditional at school. However, she feels an intense amount of pressure from
work, which is what causes her to be so high strung. She has a secret love of rock and roll
music, and longs to be as carefree as she once was.
● Ned Schneebly (Baratone): Dewey's longtime friend, former bandmate, and current
roommate. Ned is very easily manipulated, and tends to let people walk all over
him—especially his girlfriend, Patty. He still loves rock and roll music, but is held down by
Patty. He is a substitute teacher and is impersonated by Dewey at Horace Green.
● Patty Di Marco (Soprano): Ned's girlfriend. She is very demanding and domineering, and
doesn't let Ned make any decisions for himself. She hates Dewey and wants him out of the
apartment and out of her and Ned's lives.
The Students
● Summer (Band Manager, Mezzo Soprano): Summer is a high-achieving girl who hates
nonsense. Initially, she absolutely despises Dewey, but comes to love the band—or,
perhaps, the power that comes with it—and is willing to do anything to see it achieve.
Summer is one of the brightest students at Horace Green. Throughout the show, she is
convinced that winning the "Battle of the Bands" will look good on her college application.
● Zack (Guitarist, Tenor): Zack is the band’s lead guitarist and also a talented
songwriter. He desperately wants to impress his father, who’s usually too busy
with work to take an interest in his family.
● Lawrence (Keyboardist): Lawrence is an unconfident boy, and is also gluten intolerant. He
initially believes that he isn't cool enough to be a part of the band, but Dewey is able to
convince him that he's amazing.
● Freddy (Drummer, Tenor): Freddy is a rambunctious boy, as shown when he repeatedly
slams cymbals together disruptively during music class. He is constantly told he isn't
intelligent—by both his own father and Summer—but Freddy and Dewey both think that he's
intelligent in a different way, and that Freddy's father just doesn't see that.
● Katie (Bassist): Katie is a quiet, serious girl who keeps mostly to herself. She plays the cello
at school, but is quick to pick up the bass at Dewey's encouragement. She is stone-faced
when she plays, and takes her instrument and the band very seriously, although not as much
as Summer takes managing.
● Tomika (Vocals, Mezzo Soprano): Tomika transfers to Horace Green after being accepted
off of the waiting list. She is shy and doesn't speak to anyone at school, and feels as though
she's not as intelligent as the other students. However, it turns out that she is a highly gifted
singer, and becomes the secondary singer in School of Rock , behind only Dewey.
● Shonelle and Marcy (Backup Vocals): Shonelle and Marcy are quieter girls who tend to
blend into the background. They are School of Rock's backup singers, and also talented
dancers. (Their film counterparts are Alicia and Marta .)
● Billy (Stylist, Tenor): Billy is a flamboyant and artistic with a love of style and fashion
magazines. He is disgusted with Dewey's outfit choices, and how no one else in the band
shares his artistic vision, but is confident in his styling choices regardless.
● Mason (Tech): Mason is a super-smart, nerdy, tech-savvy boy who designs all the lighting
and special effects for the band using his laptop. (His film counterpart is Gordon .)
● James (Security): James becomes the band's security guard. During rehearsals, Dewey
has him stand near the door, and if James sees anyone potentially who might blow School of
Rock's cover he has the job of alerting the rest of the band so they can hide the instruments.
(His film counterpart is Frankie .)
● Sophie and Madison (Roadies): Sophie and Madison are School of Rock's roadies, but,
since the band doesn't go on tour, they are essentially backup dancers. Each girl is a
talented dancer and they could often be found together, much like Marcy and Shonelle.
(Their film counterparts are Eleni and Michelle .)
Teachers:
Mrs. Sheinkopf
Mr. Noble
Mr. Green
Gabe Brown
Mr. Sanders
Ms. Gordon
Ms. Bingham
Mr. Woodward
Mr. Janes
Mr. Macapugay
Mr. Wagner
Parents:
Mr. Mooneyham
Mrs. Hathaway
Mr. Williams
Mr. Spencer
Mr. Sanford
Mr. Ward
Mr. Hamilton
Mrs. Turner
Mrs. Travis
Others:
Jeff Sanderson - Manager of the Battle of The Bands
Stanley - Owner of the record shop Dewey gets fired from
Security Guard 1 & 2